1st Cuddington Sea Scouts was founded 24th January 1931 with an inaugural meeting. The Troop was formed on the inspiration of Mr. Francis Lamb (later Surgeon Captain Lamb R.N.) son of the Vicar of Saint Mary’s Cuddington, the Rev. Captain Lamb R.N. (Rtd.). Naturally he chose to form a Sea Scout Troop, In March they were officially registered as a Scout Troop with the Boy Scouts Association.

Along with the new uniforms the scouts obtained a small sailing dinghy ‘The Tern’ and, to the accompaniment of the firing of blank cartridges, this was duly launched into the Hogsmill River. It’s quite difficult in nowadays to imagine that the Hogsmill was once navigable. However, this vessel did not last long and towards the end of the summer a 27 foot Gig was purchased and permission obtained to moor it at the Surbiton Water Works where the Troop kept its boats until 1979. The Metropolitan Water Board shortly after allowed the Troop the use of a small brick-built lean-to hut adjoining the stables in which to store equipment. This hut remained the riverside headquarters until 1958.

In 1936 Mr Arthur Haslett and Ernie Hall founded our Wolf Cub Pack and the Cubs went off to their first Cub Camp at Mickleham at Whitsun 1937.

In 1919 the Admiralty had introduced a recognition scheme for sea scouts and in 1943 the Troop applied to join this scheme. To gain Admiralty Recognition 1st Cuddington at first combined with the 2nd Kingston (Leander) Troop as they had the necessary Boats and 1st Cuddington had enough scouts to make the required number. This worked well and the two Troops passed the Admiralty Inspections with flying colours for several years. In 1952 the Admiralty decided that Warspite and Leander Groups were each strong enough to be stand alone units so that in 1953 Warspite had its first Admiralty Inspection as Unit RN95 without Leander.

By 1938 the clouds of war were gathering and Scouters were being called away to military service so that as the war progressed it was more and more difficult to maintain regular meetings. Eventually the Cub Pack had to be suspended for the duration of the war. The scouts struggled on and managed to keep going (despite enemy air raids) under the Leadership of Frank Foster who fitted in scouting with his day job and his duties as an Air Raid Warden.

During the war, the Troop helped the war effort by collecting large quantities of newspapers, razor blades, and scrap metal of all descriptions as well as thousands of jam jars. The older Scouts erected Morrison indoor table air raid shelters for people who had approached the council for help as well as acting as messengers for the A.R.P. (Air Raid Precautions - later to be known as Civil Defence).

With the end of the war Scouters returned to the Group having been demobilised from military service. Les Fancourt back from the navy reopened the Cub Pack and in 1950 a Rover crew was formed under the Leadership of Charlie Reed.

In the post war years the Group went through strong period of expansion with the Cub Pack growing to 60 Cubs, The Troop to 55 Scouts, Senior Troop to 20 and the Rover Crew at 10. All sections were doing well in District and County competitions with many wins to their credit. The Troop and Senior Troop were successful in the National Sea Scout Regatta, The District inter Patrol Competition, and Camping Competition. The Cub Pack were also wining the Totem Pole Competition and Inter Six Competition, whilst the Rovers Crew brought back the Holman Trophy, Warrington Baden-Powell Trophy, Veterans Trophy from the Longridge Regatta and a win in the Arun Canoe Race.

In 1953 the Group purchased a piece of land in Cunliffe Road from Messrs Lamb & Sons Ltd and began clearing the land. A first the Group put down a base and bought and erected a concrete ‘Marley’ garage to house their camping equipment. They then had plans drawn up for their new proposed Headquarters and Arthur Powell a parent of one of the Cubs under took to oversee the building of the HQ. The foundations and walls were built by professionals and the remainder of the building work was carried out by Scouts, Scouters and Parents. The Rover Crew using their seamanship and scouting skills raised the roof into place. Finally the building was opened in 1960 by Surgeon Captain Francis Lamb founder of the Group. 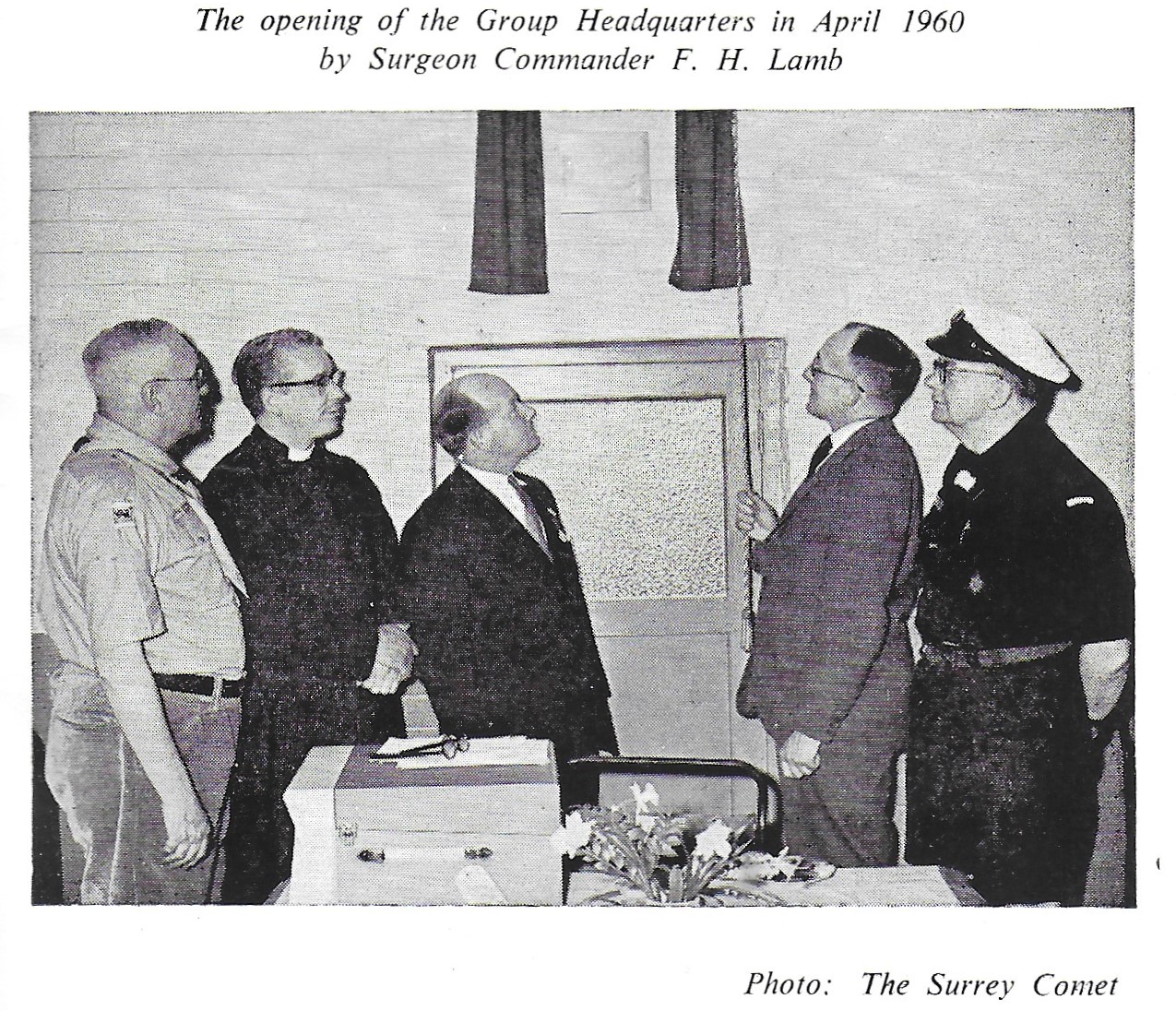 In 1970 the Group were able to complete their Headquarters with the opening of a two storey extension at the rear of the building that provided an equipment store in place of the old garage and instruction rooms.

In the late 1960s, Senior Scouts became Venture Scouts and Rovers reformed as the Service Team.

During the 1970s the Group replaced its fleet of wooden boats with boats with GRP hulls so was able to reduce the maintenance required. In 1979 the Group moved from the Water Works into the Boat House at Thames Ditton. This has enabled the Group expand its fleet to include boats for pulling & sailing, as well as canoes and motor boats so that so many more water based activities are now undertaken.

The Beaver Colony was formed with Sandra Davies as Beaver Scout Leader on September 6th 1990. In this same year the decision was taken that girls would admitted to the Venture Scouts.

Into the 21st Century

2002 brought a further change as Venture Scouts reformed to become Explorer Scouts, and in 2003 the rest of the group went mixed. Today the group is thriving with 4 mixed sections and a supporting team of leaders and other supporters. You can read more about our many current activities on the rest of this site.Early beginnings.